I’ve been watching the Woodstock movie again. I have watched it several times over the years and every time I see it, or another documentary about the late ‘60s, I ask “What happened?” What happened to the ideology, the naiveté, the good music? Why didn’t this peace and love thing catch on?

Many people say it was the drugs. I don’t think so. The drug thing was just a side show, a distraction. That is not why so many people turned from the ideals of peace and love and helping one another to materialism and distrust. I believe that most people of the Woodstock generation didn’t really want to change the world; they were just there to party. When the party was over, they started building houses that were three times as big as their parents. The average new house today is more than three times the size of the average house built in the 1950’s and ‘60s. They eventually returned to the materialistic lifestyle they learned from the previous generation.

For some of us, we found the true source, faith in Jesus Christ. Often the traditional church was slow to accept these folks who had little regard for stained glass and 19th century hymns, so they started their own churches. The Bible lists the whole list of ideals in Galatians 5: “love, joy, peace, patience, kindness, goodness, faithfulness, gentleness and self-control.” That is it. That is how you identify a follower of Christ. Except for maybe the self-control part, that pretty much describes the hippies of 50 years ago.

I have often thought about what Jesus would have said and done had he walked on earth during that time. That is the subject of my book, “Jesus of Kansas.” It is available as a free download at JesusOfKansas.com. Check it out.
Posted by Jim Mathis at 2:01 PM


It is hard not to be touched by the catastrophic flooding unfolding in southeast Texas. I heard from a friend in Houston who said they were dry but their house is now on an island. That is probably not unusual. When I hear of a disaster like this, I naturally think about what my response would be and what my level of preparedness is for myself and family. At what point do you decide to persevere and when do you make the decision to evacuate?

This is both a practical and a metaphorical question. Our culture puts a lot of emphasis on perseverance and being steadfast and strong in the face of disaster. There is not a lot of talk about knowing when to flee, close the business, or evacuate the area. One definition of wisdom is to “Know when to hold them, know when to fold them.” The history of business is littered when names of companies who held on to a losing hand too long: Eastman Kodak, Montgomery Ward, Border’s Books. All stood firm as the tides of change arose around them.

In the face of a storm, do we know of a trigger point where we would say, “I am out of here?” It might be a real storm like a hurricane, tornado, flood, or forest fire, or a metaphorical one like a bad relationship, bad job, or living in an economically depressed area.

The Texas flood gives those of us on higher ground an opportunity to think about our own situation. Is it time to evacuate this job, this business, this product line, or even this town? Knowing when to run is a sign of wisdom. Keep praying for wisdom and safety for our friends in southeast Texas.
Posted by Jim Mathis at 1:59 PM

A Short History of Stage Monitors 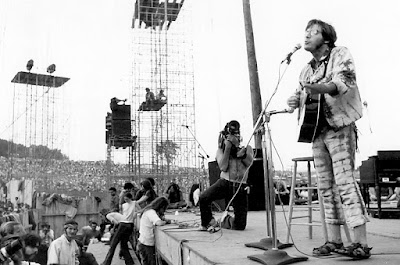 A Short History of Stage Monitors.

For most of civilization there was no need for stage monitors. Musicians just listened to each other and tried to blend in. My first experience with monitors was in a radio station. Bands often played live and there was a speaker hanging on the wall so you could hear the announcer and know when to play. They killed the monitor when the music started to prevent feedback.

By the 1960’s, when I started playing a lot louder, in bigger venues, and often outside, it became very hard to hear the rest of the band. Different bands tried different techniques. One of the most famous was the Grateful Dead’s Wall of Sound. They put all of the speakers behind the band and eliminated feedback with out of phase microphones.

We decided to go with two separate sound systems, one with the speakers facing the audience and another with the speakers facing the band. The goal, as always, was to be able to hear exactly what the audience is hearing. If the band is hearing the same thing as the audience, you can play with dynamics, sing or play louder or softer as appropriate, always aware of what the other band members are doing. This was the setup used at Woodstock. By most accounts, the sound system was the only thing that worked right there.

Most bands started using this system and some started laying the speakers on the floor in front of them. Speaker manufactures picked up on this and started making wedge shaped speakers.

At some point, musicians figured out that they could customize the mix to each speaker and the phrase “more me” was born. Mike Finnigan was always complaining to the sound guy that he couldn’t hear when he was playing to organ. The sound man built a little speaker with its own amp and sat it on the organ and the personal monitor was born.

It was a short step from there to in-ear-monitors - ear buds that each musician can control themselves. It is now possible to totally tune out everything but yourself. You can even listen to the ball game if you wanted. I am sure it has happened. The whole idea seems pretty narcissistic to me and not enough team play.

The idea of needing to hear what the audience is hearing so you can adjust accordingly seems to have gone away. We have given artistic authority to the sound crew which are probably not musicians and usually have no idea what the artist would like to sound like.

There are signs of change. Bose is making a portable sound system that sits behind the band so everyone is hearing the same thing. I hope this idea grows to bigger systems, and we can get back to musicians being in charge of their sound, 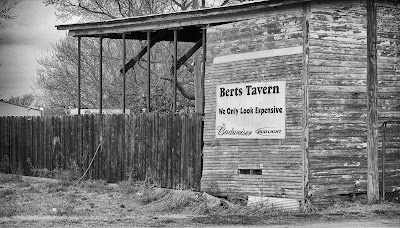 One of the things that has confused me for some time is how there can be so much economic diversity in a relative small area. For example, one town can have a labor shortage with employers begging for people and a nearby town can have very high unemployment.

This question was addressed in an article in the Wall Street Journal last week. It seems that American’s mobility is at an all-time low. People are less likely to move to another town than they have ever been before. We are no longer a mobile society and it is hurting the economy in all sorts of ways.

The Journal article interviewed several people to try to understand why this is so. Some of the reasons made sense. People didn’t want to move away from family or friends, or they had strong ties to the local community, church, or businesses. But the surprising thing was that a large number of people are just plain scared of the unknown, or are unwilling to accept or adjust to different cultures.  Some people had gone away to college, but dropped out and returned home within weeks because their comfort and customs had been challenged. They were then mentally doomed to stay in their own town regardless of the economic situation.

My wife and I and many of our friends, grew up in small towns, went away to college and settled in large cities. But for many people, and more all the time, this is just too big of a leap. The culture barrier has become too big.

The conventional wisdom is that TV and the other media have homogenized the country, but that isn’t the case, it has just made many people more fearful. Fear is a real emotion, but everyone has to decide if they will be paralyzed by it, or motivated to action so that it does not stop all that they can become and achieve.