I believe that Jesus is God, that he came to earth in the form of a man and taught a lifestyle based on love, joy, peace, patience, kindness, goodness, faithfulness, gentleness, and self-control. I also believe that He is coming back some day, and that whether I am alive or dead, I will meet Him in the sky and live with Him forever in a place called heaven.

But I could be wrong. Jesus could be just a myth or at best a good teacher. If that is the case, I will have lived a life of love, joy, peace, patience, kindness, goodness, faithfulness, gentleness, and self-control, and when I die, I am dead – end of story.

But if I chose to not believe and I were right; my life would probably be characterized by greed, self-indulgence, and trying to find happiness the best way I could.

On the other hand if I chose not to believe in Jesus and I were wrong and Jesus really was God and everything He said was true; I would live life my own way and then on that judgment day sometime in the future, face an eternity in a terrible place usually called hell.

To me the choice is plain. I would rather believe Jesus and be wrong that not believe Him and be right.
Posted by Jim Mathis at 10:03 AM

This morning I had breakfast with a group of men I see on a regular basis. As I walked in one of them said, “Hey, you look like Johnny Cash,” referring to my black pants and black jacket that I wear about 75% of the time. I laughed and commented that I like black. Another guy said, “If you could only sing like Johnny Cash, too.” I said, “Actually I hear that a lot,” thinking of the half a dozen people a week that say I sound like Cash. As the banter continued, I realized that none of the men in the room had ever heard me sing or even knew that I played in a band, even though I am sure I brought it up on several occasions.

Nobody there knew that I had sung “Big River” and “Folsom Prison Blues” to a packed house and cheers just three days before. I couldn’t think of a way to mention it without sounding like I was making something up or bragging, so I just let the subject drop.

The point is – most of us are multi-faceted and many areas of our lives don’t cross each other. I often ask musicians how many of their friends have heard them play. Surprisingly, the answer is often – not many. They often lament that their fans and friends are two different groups of people, making it very hard to talk about their music and musical accomplishments with their friends.

I don’t know the application to this story other than the fact that we often don’t know our friends very well. Our relationships are often superficial. It is very difficult for more than a small handful of people to know us well enough to know what we care about or what we think. It is difficult for us to know our friends and what they care about. But it is worth the effort. Everybody is worth knowing and worth finding out what makes them tick and what makes them come alive.
Posted by Jim Mathis at 9:07 AM

The news is full of sectarian and ethnic violence. In Africa, the Mid-East, and elsewhere, feuds and conflict that have been going on for generations, erupt at the slightest provocation. Despite many social injustices, this country has been relatively free of such conflicts. The reason is that we have a strong culture of forgiveness.

One of the solid Christian principles that has deep roots in American society is the concept of forgiveness. Sometimes it is not easy, but we know that we must forgive others, just has God can forgive us.

Like most Americans, I have an eclectic mix of ancestors. Some members of my distant family had their land stolen from them by order of the U.S. Supreme Court when gold was discovered on their land. The U.S. Army arrested them and forced them to walk from their ancestral homes in Tennessee, North Carolina, Alabama, and Georgia to Oklahoma. Thousands died along the way. They were Cherokee and the forced march is now called the “Trail of Tears.” The Cherokee were not savages but rather successful merchants, craftsman, and farmers. This was only about four generations ago, yet the Cherokee have forgiven the United States and are loyal US citizens.

Another part of my distant family came here in colonial days fleeing religious persecution in Europe. It is seldom mentioned that they were Evangelicals fleeing persecution by the Roman Catholic Church and the Catholic controlled governments. That is what was on their minds when the establishment clause was written into the constitution. Evangelical Protestants and Catholics are both forgiving people and this is now considered ancient history.

More recently, my family members came here in search of jobs and land. They left impoverished situations in search of a better life, just as many still do today. Like today, they weren’t necessarily met with open arms. They had to work hard to prove themselves worthy to be called Americans.

Other people were kidnapped from their villages in Africa, put on ships heading to America and sold into slavery. Even though they were freed less than 150 years ago, forgiveness is the order of the day.

Without forgiveness, this country, too, would be embroiled in ethnic and sectarian violence. Just about everybody would have no trouble thinking of a “beef” against their neighbor.

The answer to world peace is easy – forgiveness. People must forgive each other for past atrocities, and keep on forgiving because we are going to keep on treating each other badly.
Posted by Jim Mathis at 11:11 AM 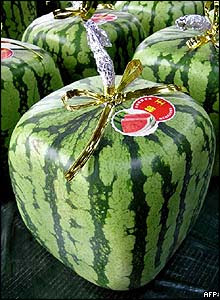 My old High School buddy, Wayne Norton, now Dr. Wayne Norton of the First Baptist Church in Coffeyville, Kansas, reminded me of the square watermelons grown in Japan. It turns out that all you have to do is put the watermelons in a square box while they are growing and they will grow to the shape of the box. Pretty cool, huh?

Of course the same thing happens to people. Put us in a square box while we are growing and we take on the shape of the box. Any shaped box for that matter will shape us just as well. Most of us didn’t have the opportunity to decide the type of “box” we grew up in, but since we continue to grow our whole lives, we can change boxes whenever we want.

The box may be our relationships, it may be our neighborhood, or it may be the entire culture shaped by the media, music, and entertainment that we expose ourselves to.

As adults, we have lots of control over what we put in our minds. We have dozens of TV channels, millions of songs on iTunes, thousands of books, and hundreds of magazine and newspaper titles to choose from. If we choose to degrade our lives and conform to the lowest common denominator of the culture we certainly have that option.

Romans 12:2 says, “Do not conform any longer to the pattern of this world, but be transformed by the renewing of your mind. Then you will be able to test and approve what God’s will is – his good and perfect will.”
Posted by Jim Mathis at 10:17 AM

I was pleasantly surprised this morning to see an essay I wrote on the Opinion page of the Kansas City Star. It is pretty much taken from this page a few months ago, so it may sound familiar to my regular readers.

In case you missed it, here is the link:
http://www.kansascity.com/mld/kansascity/news/opinion/16813778.htm
Posted by Jim Mathis at 11:02 AM