A friend was in last week lamenting about the quality of workmanship from the people who had come to repair her apartment. I concurred about how hard it was to find people who knew how to do stuff. I wrote about that in this blog back on September 8. Then I pointed out that our educational system is upside down with the best students discouraged from learning a craft. This leaves us with the lowest performing people doing the most important work, like repairing cars and putting on roofs.

This is contrary to scripture where the Bible tells us to work with our hands and honor those who do. When God came to Earth as a man, He chose to do so as a craftsman – Jesus, the woodworker.

I was reminded this week that a big part of the problem is the way craftsman are portrayed in the media. I happened to be watching “America’s Funniest Home Videos.” The set-up was that this four year old was showing great promise as an appliance repairman. I thought they were going to show a four year old who had dismantled his mother’s washing machine or a kid with the vacuum cleaner in pieces on the floor. Instead they showed a little boy bent over with part of his behind showing. I wonder how many hundreds of young people decided not to be appliance repairing repairmen with that one clip. I know if I was a sixteen year old with plans to go to technical school, I would have reconsidered after seeing just that one ten-second clip.

What the video really showed was that TV producers consider themselves better than appliance repairmen. This is a premise I would seriously doubt.
Posted by Jim Mathis at 10:18 AM 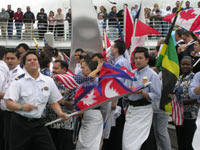 My mother and I just returned from an Alaskan cruise aboard the Royal Caribbean ship, “The Visions of the Sea.” It was a fun trip, but the thing that impressed me most was the crew.

There were 755 crew members from 51 different countries on board. Needless to say they came in all shapes and colors from many different backgrounds. The one thing they had in common was a servant’s heart. Along with that came a strong work ethic and a desire to please, not only the passengers, but each other.

We made an effort to get to know some of the crew and find out a little about them. Some were taking time off from college or right out of school, others were seasoned professionals, while I’m sure others just needed the money. But they honestly respected each other and worked hard to make the cruise a wonderful experience for everyone involved.

One of the crew members commented that the crew was like the United Nations except that here they actually liked each other. My observation is that at the U.N. the purpose is to defend your countries honor at all cost; on board ship, the purpose is to work together and get the job done. This makes a huge difference. I half jokingly suggested that we should fire the United Nations and give the job over to the crew of a cruise ship, after all most of the nations are well represented. I honestly believe that a solution could be found to most of the world’s problems within a few days.

Jesus talked a lot about being a servant. He emphasized the importance of having a servant’s heart and looking out for the other guy. As usual, we have the wrong people in places of authority. Usually, only those looking out for themselves make it to be leaders of their countries. Ambassadors are then giving the job of honoring their country and its leaders. Few have any desire or motivation to actually solve problems and help those in need.

Unfortunately, I didn’t encounter any ship crew members who wanted to go to the U.N., they would rather serve each other and their guests.
Posted by Jim Mathis at 10:11 AM