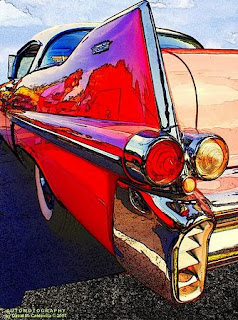 When I was seventeen and preparing to leave for college, I needed a different car. It was 1966 and a local car dealer had a couple of good choices. There were two solid low mileage cars in my price range. One was a gray 1958 Oldsmobile Super 88. The other was a red ’57 Cadillac Coupe deVille. My father strongly suggested that I buy the Olds. Since it was mainly his money, I did.
The Oldsmobile got me through a year or two of college, and it would be another 25 years before I would get my first Cadillac. There is hardly a month goes by that I don’t remember the way I felt when I saw that red Coupe deVille sitting on that used car lot. I wonder if my life would have been different if had showed up at college in a red Cadillac instead of a gray Oldsmobile. I am sure that it would have been much different – how I am not sure.
With 1957 Cadillacs selling in the $50K range and red Coupe deVilles being among the most desirable, that is one of several pieces of bad advice my dad gave me. It was right up there with “always clean up your plate.”
Of course, if I had bought the Cadillac then, it would have been long gone and I would be regretting having sold it, like so many other cool things I used to have.
An interviewer once told a famous race car driver/collector, “If you still owned all the cars you’ve had, you’d be very rich.” The response was, “No, if I’d been rich, I would have kept all the cars I’ve owned.”
The reality is that it takes a lot of time and money to maintain an old car, just like it does all of our personal property. And in the end it will be rust. You don’t see many ’57 Cadillac any more, or ’67, ’77, ‘87’s for that matter. They were made to be driven, used-up, and replaced, which is exactly what happened.
Putting our trust in temporary material items is the very definition of our materialistic society. Peace and contentment comes only from placing our trust in the God that created us, not in the things that we created ourselves.
Posted by Jim Mathis at 3:06 PM