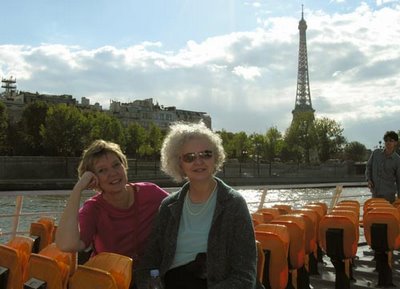 Louise and I and some friends just returned from 10 days in France where we were all celebrating out 35th wedding anniversaries.

It had been a quite a few years since we had been to France, so I had inadvertently bought in to some of the stereotypes and clichés about the French. Was I ever wrong! Everyone we encountered was warm and friendly. We enjoyed lots of wonderful conversations with all sorts of people. Everywhere we looked, people were working hard. The streets were immaculately clean and everything worked. There were no pot holes, no steel plates over the streets. We saw a new bridge that is the longest and the highest in the world. As far as I could tell, all the workers were Frenchmen with very little imported labor.

I suppose that if we hard began speaking loudly in English, demanding that our coffee be watered down and our Coke poured over ice, we might have been treated differently. I am also sure that if a French speaker walked into an American café, speaking loudly in French, demanding that things be served according to his custom, he would not be treated with much respect either.

Respecting other people’s customs and history is an important part of getting along as people. In I Corinthians 9, Paul talks about the importance of respecting the culture in order to share the love of Christ and His message of reconciliation.

We don’t have to travel around the globe to find other cultures, sometime we just need to travel down the street. But the message is still the same. People are people and if shown respect, they will respond with respect.
Posted by Jim Mathis at 10:03 PM